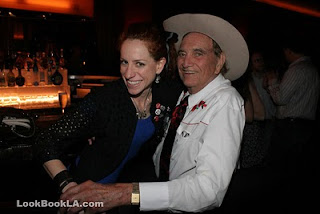 One of my favorite aspects of librarianship is assisting senior citizens with the numerous services available to them at their local public library. Learning how to use the computer is one example, as seniors are often scared of technology and find that having a librarian nearby to hold their hand, helps generate new knowledge as well as greater confidence. Recently, I also helped a senior citizen that was in need of some handholding and while we weren’t at the local library, I still felt I should offer the same service.

I was attending a fashion event at a swanky Los Angeles hotel with my two bosses, and it was there that I met the sweetest old man wearing a ten-gallon hat and cowboy-style shirt, with a somewhat matching tie. He seemed very out of place, especially with the fashion police already on assignment at the party. I kind of felt bad for the guy, so when he asked if I wanted to sit at the bar and have a drink, I figured why not (even though I was already holding a full beverage.) Maybe he wasn’t wearing his glasses? Maybe he needed my assistance to find the barstool? I was a librarian. I had to help.

Already the fashionistas in attendance were staring and laughing at this Texan and his wannabe Carrie Bradshaw, this version being the star of “No Sex in the City.” I hadn’t been out on the town in a long time and certainly not in a short dress with heels, complete with a black ribbon tied around my ponytail. I was trying a new look - one that was working too well, as I was already square dance material for a cowboy wanting to “do si do.”

The man was like 90 - in age and in temperature. He was hot, and not the good kind. By the smell of him, he must have just come from a hard day at the ranch. I tried not to judge. Often the homeless come to the library to find sanctuary and have access to the free materials, so couldn’t this nice man come to the bar smelling like a cow pie? So what if he needed some Brut, he deserved to get drunk just like everybody else.

To avoid thinking about his odor, I tried to make conversation. “So, you come to these parts often?” Why I suddenly phrased sentences like a country bumpkin is still a mystery.

“What?” he said, tapping his hearing aide, then placing his hand on my thigh, as if that was going to make my words more clear.

“I’m a librarian!” I shrieked, startled by his wrinkly hand on my H & Mmm, thinking the answer might revolt him enough to remove his hand by sheer respect of a profession dedicated to gathering information, not sexual favors.

“I used to go to the library as a kid. I like books,” he said, while tapping my thigh rapidly like he was giving the SOS signal from the sinking Titanic. “I also like young girls…”

And that’s how the night would go. Him tapping my thigh, me repeating myself loudly, over and over, each time trying to offer information that I was more pen pal, than play pal, all while my one boss laughed at me from across the bar, taking pictures on his Blackberry. I guess the joke was on all of us. The man turned out to be Cal Worthington, a multi-millionaire that was on TV for years promoting his numerous car dealerships with the famous slogan “Go see Cal, go see Cal, go see Cal,” while doing cheesy stunts like standing on an airplane wing while in flight or putting his head in a tiger’s mouth. Being from the east coast, I had no idea, nor did I really care. I just mistakenly thought he was a nice man, looking for some company in a city that is often cruel. Boy, was the joke on me. Or was it?

The next day at work, my boss waved his Blackberry around and thought he was suddenly the comedian of the office, until I told him the old dude was actually a rich dude on TV commercials. Suddenly, he started to sing the TV slogan and do a little dance, of which he would annoyingly do for the rest of the day. My other boss, a suave, good-looking Ralph Lauren-type, suggested I call the hotel to “see how he was doing.” He knew I was getting over a breakup and thought it would be fun for me.

I had to admit I was curious, and couldn’t believe my ears when Cal answered the phone and invited me to dinner that same night. I was excited about finally eating something other than celery sticks, and began to wonder if I was perhaps being too hard on a lonely man. Maybe it was the Mercedes in my eyes, but I was flattered he remembered me at all, especially with all of the arm candy available in the bar. My boss immediately insisted I get out of my “flight attendant” outfit and put on the mini dress again.

The following are a few snippets of Cal’s best “one-liners” throughout the evening, along with some library services offered to senior citizens:

1. Libraries offer many fun activities for seniors including Scrabble and Book Clubs.

Cal: “We are going to Spago, is that okay? Wait. Can I take you to dinner tomorrow night instead? I actually have an appointment tonight…unless that appointment is with you?”

Apparently the guy overbooks his dates often and can’t remember which girl he is taking out, which I guess if a fun game to play if you are the one he finally chooses. When I remind him that he invited me out to dinner and told me to meet him at the bar, he decides that I am his appointment after all. So if you want to feel like your night is going to get worse before it gets better - Go see Cal, go see Cal, go see Cal!

2. Did you know that often seniors are homebound and therefore rely on library services that deliver directly to their homes?

Cal: “Is your car in valet? You can drive. I don’t really know where my car and driver is.”

The guy owns numerous Mercedes and Ford dealerships, yet I am driving my rented Kia from Enterprise-Rent-A-Car to the ultra-trendy Spago. So if you want to drive your crappy rental car to a fancy dinner in Beverly Hills - Go see Cal, go see Cal, go see Cal!

3. Often seniors are unable to read regular printed materials therefore the large print section of the library is quite popular.

Cal: “I forgot my glasses. Do they have glasses so I can read the menu? Hey, how about some more champagne? Wait, how about a kiss first!”

The guy thinks I am going to kiss him as some kind of toast before sipping my glass of champagne. Even with his borrowed glasses he should be able to see that isn’t happening - ever! So if you want to get your cheek brushed by lips older than the Hollywood sign - Go see Cal, go see Cal, go see Cal!

4. Senior citizens are actually some of the most active library users.

Cal: “I would like it very much if you would escort me back to my hotel room and stay the night.”

Dessert hadn’t even been served and Cal is pretty clear about the one item that he wants that is NOT listed on the Spago menu. So if you want to feel like a cheap whore after eating your first real meal in over two months - Go see Cal, go see Cal, go see Cal!

5. Seniors can find a variety of information at the library in regards to health and wellness too.

“I don’t know how good I would be anyway, especially after having these two glasses of champagne.”

Obviously, I turned him down so if you didn’t get a clear picture of what he hoped would happen in the hotel room, well, you sure as heck don’t need glasses to see it now! So if you have no respect for yourself and want to land an old rich dude - Go see Cal, go see Cal, go see Cal!