Thanks to a few days of rest, I am finally able to give a recap of the last couple of weeks filled with exciting shows and programs...

My first-ever children's program to kick-off Summer Reading at the Seminole Community Library on June 19th was a hit!  I had spent over a month developing the seashell program from scratch, incorporating my own photographs and videos taken over the last year on my beach.  With most kids in the Tampa Bay area spending the summer at the beach, I hoped to educate them about the seashells they would find while also teaching them that live shells (with the animals still inside) should probably be thrown back to live another day.  The designer in me also shared ideas for how to use broken shells in arts & crafts, and of course, just like my adult programs, I performed a parody song honoring seashells called "SHELLabration," where I play an Australian Trumpet shell (which is quite similar to the French Horn I played for 10 years!)  To see some footage from the program, click here.  While I'm sure the kids enjoyed performing the song with me at the end and learning about all of these shells, I know the free shells I gave out was their favorite part of the whole program.  I want to thank the St. Petersburg Shell Club for providing some of those shells (I also gave out ones I had collected as well), in addition to providing most of the giant shells showcased on the display table.  As a member of the Board of Directors, I encourage anybody interested in learning more about seashells to come to our meetings when we start up again in September.  For more information, click here.  Thanks again to Jill Storm and the Friends of the Seminole Library for having me.

The next day, I was back to performing for adults where I was the special guest for the Palm Harbor Newcomers Club.  On arrival, I instantly noticed that my favorite book The Alchemist by Paulo Coelho was the centerpiece of each table and after commenting about the odds of that happening, I was told they did that on purpose.  I almost shed a tear right there I was so touched.  Nothing brings me greater joy than sharing my love of reading.  I was treated so kindly by these incredible women as they purchased my literary purses or simply offered encouraging words like not to give up or that libraries need more librarians like me.  I want to thank Barb Griffin for reaching out to me and inviting me to perform.

On Saturday, I was back at ARTpool Gallery with my friend Marina Williams to perform at her 80's Pride Prom party.  A huge fan of the 80's and the LGBT community, I just knew I had to make an appearance.  Even with a downpour of rain, nothing could keep us from having an awesome time.  I chose to perform "I Ran (After THE GINGERBREAD MAN)" a mash up of 1982's hit "I Ran (So Far Away)" by A Flock of Seagulls and the fairytale The Gingerbread Man.  Here's a video of the live performance:

***For a direct link to "I Ran (After THE GINGERBREAD MAN)," click here:

Posted by Meredith Myers at 9:24 AM

I am so excited that one week from today I will be doing my very first children's program at the Seminole Community Library to kick-off Summer Reading!  After such an incredible year of touring libraries and book stores performing for mostly adult library patrons and staff, (where I heard many times that I should think about developing a kids program), I am now happy to present "Dig Into Shelling," a children's program devoted entirely to my other passion - seashells! 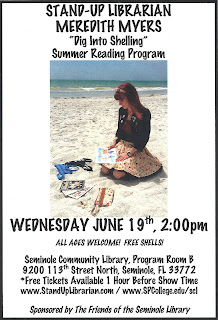 I've talked many times about being a member of the St. Petersburg Shell Club (of which I am now also on the Board of Directors), so shelling seemed an ideal topic to share that would incorporate my knowledge and love for seashells, especially since most kids this summer (when not at the library) are probably at the beach!  And just like my adult programs, this event will include a variety of educational entertainment from reading and audience participation to show and tell, and yes, a very special shell song & dance!  Did I mention I am giving out FREE shells!?!

I want to encourage any parents in the Tampa Bay area to bring their kids to the Seminole Community Library on Wednesday, June 19th at 2pm to join in on the fun.  Due to the popularity of the summer programs, (and the limited space available), free admission tickets will be distributed one hour prior to showtime at the entrance to the Program Room B.  The library will not be able to accommodate large groups from local day cares, summer camps, etc. due to fire code restrictions.  The Seminole Community Library at St. Petersburg College, Seminole Campus is located at 9200 113th Street North, Seminole, FL 33772.  For more information, visit www.spcollege.edu/SCL or call the Youth Services Department at 727-394-6913.

Wow, it is almost 11pm and I have yet to acknowledge that today is the 3rd Anniversary of creating Stand-Up Librarian and StandUpLibrarian.com!

I would say that time flies but it really doesn't in this case as I am completely aware of how long and challenging the past three years have been.  Of course, I am also absolutely astounded and amazed at all of the fun I have had and the dreams that have been realized - especially in just the last year!  So many of the things I have accomplished I never once imagined when I first decided to mash up the words "stand-up comic" with "librarian" to create Stand-Up Librarian after graduating with my Masters degree in Library & Information Sciences in 2010.  Initially, I thought I would write some funny essays online about my adventures in librarianship and maybe if I got the nerve, try performing stand-up comedy again but this time not curse or put people down.  And maybe if I was lucky, someone out there would come to my blog after receiving my resume and see just how passionate I was about libraries and hire me as a librarian!

So, two out of the three happened.  Mostly because writing and performing were within my control if I just faced my fears.  While I have yet to be hired as a "librarian," I have instead been hired for shows & programs as the Stand-Up Librarian, so in a way, that is just as cool!  Plus I look at how much I have learned over the last three years just by simply trying things that scared me to death or thought I could never do again.  I will save most of those adventures for the book I am writing, but thanks to creating Stand-Up Librarian, I have finally become the person I always wanted to be: a person that can keep a job!  Seriously, this is the longest job I have ever had and it continues to make me happy, while challenging me to not only be a better Stand-Up Librarian but a better person.  Two years ago I also made the decision to quit drinking, which as a result has made me much stronger and less stupid.  Regardless of where I go from here, I will always be proudest of that.

Thanks to each and every person I have encountered on this journey.  Some were mean, most were supportive, but ALL have inspired me in one way or another.

Growing up is awesome.

Posted by Meredith Myers at 9:45 PM