Stand-Up Librarian now has her own YouTube Channel! It's like Oprah with OWN...only poor and unemployed. Anyway, should you want to subscribe to the channel or check out a few of the videos I have already posted, I’m at:

Or just look to the right side of this page for the new video section and watch the videos immediately! Wow, I am sure all six of you are thrilled...
Posted by Meredith Myers at 12:54 AM

Libraries Are For the Birds

What the flock? Apparently a hawk is loose in the Library of Congress and this is when people want to bring some attention to libraries. Oh Poppycock, can someone peck some sense into these people? Where’s Woody Woodpecker when you need him.

For one, the LOC is pretty huge. What bird wouldn’t want to set flight in the vast high ceilings of the beautiful Main Reading Room or soar among the numerous pillars and antiqued art, with a birds-eye view of signage promoting books? This bird is simply smart. What is stupid are the tons of dodo birds called humans who aren’t utilizing the vast knowledge available to them at their local libraries. What the people at the Library of Congress need to do is KEEP the bird in the library if it helps generate some traffic to the stacks. Heck, hire an unemployed librarian to dress up as a bird and have them just perch on one of the pillars if that's what it takes to get people to the library. Jeez, people think!! Use this rare (and stupid) press opportunity to TRAP all living things in the library - who knows what might happen as a result. Intelligence? I know, I'm getting my feathers all ruffled over this but please do yourself a favor and fly to your nearest library before some seagull craps on your car out of spite.

Posted by Meredith Myers at 7:09 PM

"I was happy to meet Meredith Myers of StandUpLibrarian.com, whose business card reads, “So a comedian walks into a library and decides to work there.” She wore the cutest hat. She’s not your grandmother’s librarian, but then again, who is? Librarians are hot. That’s the truth."

Meeting Luanne Rice at the ALA Midwinter Conference was such a pleasure - I look forward to writing a blog post about her latest book The Silver Boat closer to the publishing date! Thanks Luanne for including me on your site in such a positive way along with so many amazingly, diverse librarians and book lovers! THIS is why we all became librarians, people - not to fight one another but because we all love reading!!! 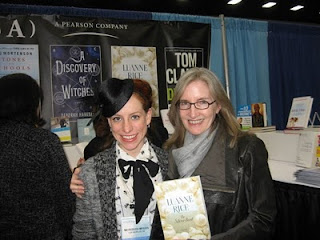 Wow - this is hilarious - The Annoyed Librarian, a blog I have long admired for pushing the bar and pissing people off, has devoted an entire blog post about me in that KPBS article. And to think none of this Meredith-bashing could have happened if I had only worn a headband instead of that funny hat to the ALA conference. Another example that fashion is powerful, people!

Now, this is not the first time people have misunderstood me and/or wanted to make a bad comment about me behind my back or online. As I always say, I am not a comedian but a verbally abusive motivational speaker…look out Tony Robbins! I am just terribly shocked that this time the trash talking came not from a comedy performance but from my fellow librarians, who I love and admire! And they called me old!!!! Now THAT is funny.

I don’t usually make it a habit to respond to criticism or morons with too much time on their hands, because in my opinion if you don’t get it, too bad. However, as I am still new at all of this blogging stuff, I will make an exception this one time…

Here’s the link to Annoyed Librarian’s ‘Substance, Not Style’ article and the numerous bad comments from my “fans”:

And here is my response to all of it:

“Jeez - thanks everybody for throwing me under the bus. I was interviewed for the KPBS article, I didn't write it nor ask to be the "spokesperson" - plus the article and my quotes were focused on YA (where image is more important than it is with adults, who are smarter and can read between the lines - at least I thought so till I read your comments on here.) Are you this judgmental with your patrons too? I spent 4 years getting that degree so I have earned the right to call myself a librarian - a ton of money and top grades just for a "feather in my cap." My purpose with StandUpLibrarian.com is to entertain while educating people about the importance of libraries and ALL librarians (even you bitter, judgmental, unfashionable ones) - because that is what I can offer this field using my past experiences in comedy and PR. Humor, fun, numerous mistakes! It is my opinion, my journey, not an example of right or wrong - after all, I am still learning. What are you doing besides putting down someone who has done nothing but admire all of you and hope to work with you someday? You can hate me, think my opinion is unjustified, call me old, and say my failed purse business from 2005 is a joke, but at least I am using my time and energy trying to make positive change in an industry that needs it right now. My mission is to show the world that libraries are an important and fun place to be - now stop talking shit about me and help me!”

Bottom line, I am like no other person in the world and yet, I wouldn’t wish my life on any of you. It is complicated and confusing, with me wearing many fabulous hats with no real clue as to what I am doing in any of them. However, for the first time in my life, I am happy being exactly who I am (successes and failures) and with tremendous effort, I am trying to do something I love while hopefully, being a fun, positive influence in the process. I cannot control the press or what people say when they read the press, I can only laugh at it knowing my heart is in the right place. If you choose to step on it, so be it. 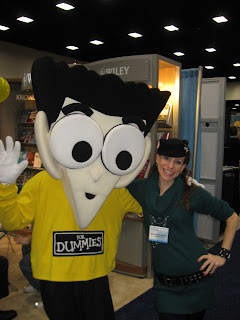 Posted by Meredith Myers at 4:35 PM

I know, I know, it’s January 19th, a bit late for champagne toasts and party horns but I’ve been traveling quite a bit so once again this blog has gotten away from me. Note to self – New Year’s resolution – stop making excuses for not writing on blog and just do it! Shut up, self, I’m trying to write here! So, before I can jump into 2011, the writer in me needs to first wrap-up 2010.

My first bit of “travel” started around Thanksgiving, when my bi-polar roommate kicked me out of the apartment for not moving two boxes in the hallway (“this apartment is not a storage facility”) and for erasing Barbra Streisand “Oprah” episode on DVR ("Why would you erase that historic episode of all the recent Oprah shows? It never occurred to you that something that half the nation was looking forward to might be something I might want to watch as well?") It certainly wasn’t the best Thanksgiving either, and don’t get me started on Black Friday, where in my world it didn’t consist of shopping, but of me receiving a text message at work saying “You’re stuff is all over the yard.” I won’t go into further detail without a book deal (it’s that good of a story!) but the important part is that the universe was looking out for me and I am now living in a more peaceful place full of sane people.

December was filled with getting settled into the new place, holiday activities with friends, time with the family back in Florida, and me interviewing for a library position with Glendale Public Library, of which I will write a separate post about later. The true highlight of the month was getting the opportunity to go to “The Ellen DeGeneres Show” – twice! Ellen surprised those of us who attended her November 30th taping with another ticket to return for one of her ’12 Days of Giveaway’ shows where I ended up getting tons of wonderful gifts that I then was able to share with my whole family. Let me tell you when you’ve spent most of the past year as a grad student and volunteering at the library for free, Ellen was Santa Claus, and boy, do I believe!

I came back to Los Angeles to work New Year’s Eve at my weekend server job, and wouldn’t you know it, I made money, had fun with my co-workers, drank a champagne toast, and kissed a hot Aussie at midnight who was seated in my section – now THAT is great service! (Again, good story – book deal, call me!)

So the year ended somewhat on a high note, after months of challenges to my strength and determination. If I have to sum it up, 2010 was basically a year of tests and obstacles to overcome. A year of taking a step back in order to take a step forward. A year of following through to finally finish things I had started years before. It was a year of heartbreak, confusion, determination, courage, and independence.

Finally, it was also the birth year of this blog and the whole concept of Stand-Up Librarian, which is to educate and entertain people about libraries, while at the same time dispelling the stereotype of the ‘typical librarian.’ Like many of my creative pursuits, Stand-Up Librarian was an idea I’d had many years ago but wasn’t ready to implement for numerous excuses that I made to myself like whether I was qualified, funny, or successful enough to justify an audience. I’m done doubting myself (especially when I saw that “Jersey Shore” Snooki ‘wrote’ a book.) So, be ready to have some fun in 2011 - I have a feeling it is going to be huge!

Now, as Ellen would say, let’s dance…(yep, that's me at the beginning!)

Posted by Meredith Myers at 7:55 PM

In an effort to be an even 'hipper' librarian, I am going to try tweeting. I know. I am so behind in the times. You’re thinking, “Wow, I thought this Meredith Myers would be have been on that years ago.” Nope. Sorry. I was too busy doing all of my tweets on Facebook like some dummy, not realizing that I should have been on Twitter all along. Anyway, should you want to follow me, I am at:

Oh, and the spelling is off because I guess there is a word limit on Twitter. Boy, is that going to give me problems since most of the time I can't seem to shut up. What is that? A round of applause? In that case, you're welcome!

Tweet ya later! (Jeez, I am such a nerd sometimes…) 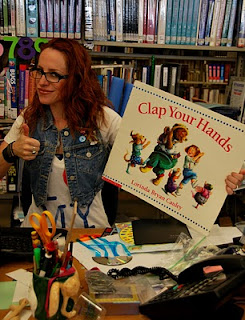 Posted by Meredith Myers at 4:54 PM

This article written by Ana Tintocalis at KPBS in San Diego is awesome and I couldn't be more grateful. I've always worn many hats and this time it paid off! My attending the ALA Midwinter Conference was simply an eagerness to learn how I could be a better librarian to hopefully get a job. I am so proud at this moment that I can barely come up with something to say without tears rolling down my face - people are finally listening and starting a discussion. Librarians are cool, smart, and we need every single one of them. I still don't have a job in a library but perhaps my job for now is just to be the voice that maybe once in awhile people listen to.

Thank you Ana and KPBS... 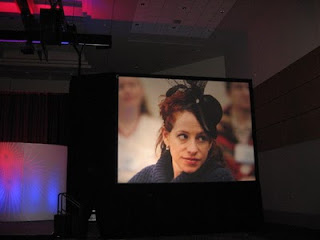 Posted by Meredith Myers at 9:36 PM