***For a direct link to the video, click here: "It's the Great Pumpkin, CHRIS Brown"
(Not available on mobile phones)

I can’t believe I did another literary music video so soon after “The Raven is Hard to Handle” but I just love Halloween too much to allow it to go by without giving it some “Pumpkin Luvin.”  Everybody close to me knows I obsess around the holidays with anything pumpkin.  I think I am up to twenty pumpkin food items (my pumpkin tea & pumpkin sparkling non-alcoholic cider being my favorites), so of course being a designer, I also had to sew a pumpkin purse, then a matching hat, and just a week ago decided I needed a skirt too.

So once again the idea for “It’s the Great Pumpkin, CHRIS Brown” came from something I made!  But this time it also incorporated a joke I had been performing that mashed up the Peanuts classic It’s a Great Pumpkin, Charlie Brown with a book called Hip Hop Chris Brown.  Mashing up books has become my signature at my literary comedy shows.  I just love it!  But whenever I did the joke, I just knew it could be better with Brown’s music, some of his crazy dance moves, and a whole lot of humor.

Choosing Chris Brown was a risky move due to his ongoing controversy with Rhianna.  As a comedian, there were so many jokes I could have incorporated into this thing but as I have chosen to be a comedian that lifts people up, not puts them down, I decided to focus on my love for the Peanuts gang instead. Besides, taking two extremes and mashing them together to promote books and having fun at the library (or at this case the pumpkin patch) is kind of what made me want to do it in the first place.

And Busta Rhymes is an incredible rapper!  The speed to which he raps in that middle section is a true skill.  The minute I heard that song, I thought jeez, I bet he reads fast too!  And that is exactly what I tried to do.  I read the entire book really fast, cut it in two parts, and then put the tracks on top of one another so what you hear is actually the entire story!

It’s no secret I love to dance and dancing in a pumpkin patch was pretty cool.  Boy, did I want to break dance and do flips like Chris Brown but knowing me, I would probably trip on a pumpkin or land on a rake or something, and well, I have Halloween parties to attend and candy to hand out so maybe next year…when I have health insurance.

I hope this Halloween when you watch “It’s the Great Pumpkin, Charlie Brown” on TV, you might think of me and little Brody drinking pumpkin juice and dancing to a great story.  Then maybe go to your library and sign up for one of the programs there.  Just be safe this Halloween.  Dressing up as someone else is fun for one night but if you are really lucky, you might find yourself dressing up all the time…and being IN those stories!

Happy Halloween everybody...especially to my friend, Brody!
Posted by Meredith Myers at 4:13 PM

"The Raven is Hard to Handle"


On October 7, 1849, Edgar Allan Poe passed away at age 40 for reasons that to this day are still a mystery.  It almost seems a fitting end for the man who is often called the ‘Father of the Detective Story’ and while we may never know the true ending to his life, what we do know is that he had incredible talent for composing words in short stories, essays, book reviews, and poems like The Raven, published in 1845.

I would love to brag about all of the Poe works I have read but the truth is, classics like Poe’s aren’t always so easy for me to understand.  Sometimes I feel like Judy Holliday in “Born Yesterday” with a Poe book in one hand and a dictionary in the other looking up all of the words I can’t comprehend.  “I looked up every word!” OK, I just did a scene from that play in my acting class so I have the script “laying here…lying here.”

And I know I am not the only one who has this trouble of grasping language from another time.  At least I hope I am not alone.  Perhaps there are some kids out there that have my back on this?  I also have a hard time memorizing words.  It has always been a challenge for me as an actor and comedian to remember my lines – even the words I write myself!  So sometimes I need music to help me grasp the material.  I need rhythm.  Something to sway my hips to is also helpful.

It is with these admissions and to honor the great Edgar Allan Poe that I have created a literary parody song that was not only so fun to do but truly helped me learn these three verses of The Raven poem!  You are on your own for the rest of it.  Thanks to one of my favorite 90’s songs “Hard to Handle” by The Black Crowes, I am proud to share my brand new literary parody song “The Raven is Hard to Handle” where I actually sing!  Not necessarily well, but certainly with lots of passion and heart.  Oh, don’t you just love Poe’s The Tell-Tale Heart? "Villains!" I shrieked. "Dissemble no more! I admit the deed!  Tear up the planks!  Here, here!  It is the beating of his hideous heart!"  No, I didn’t memorize that.  I have like 20 Poe books here on my desk leftover from the video shoot.

As is my mission as the Stand-Up Librarian, I want to promote libraries and show my love to my fellow librarians, so this video is no different.  There are several “shout outs” in my costumes and especially on my purse guitar!  I love literature as much as rock n’ roll, so grab a set of Raven wings and get ready to rock...at the library!

***Please visit: www.StandUpLibrarianDesigns.com if you want me to make you a Raven hat or headband!  Or if you are looking for some fashions that are literary fabulous!

I am so very happy to share my new library of literary fashions at StandUpLibrarianDesigns.com!  If you love libraries as much as I do, you will certainly appreciate the design and layout I have created that not only educates people about the structure of the library but allows each patron of my library to keep all of the library materials checked out at the circulation desk.  It is literary fabulous!

Won't you come be a patron at my library? 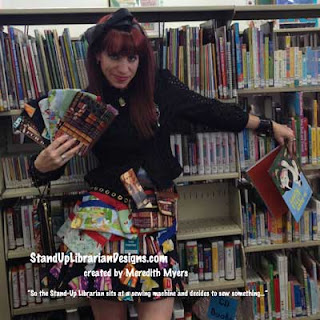 Fashions that are literary fabulous!

Posted by Meredith Myers at 9:15 AM