"So the Stand-Up Librarian sits down at a sewing machine and decides to sew something..." 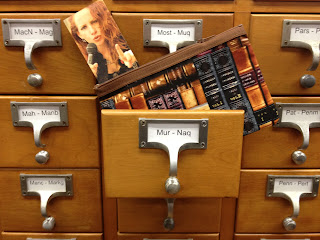 I am writing from New York City, the fashion capital of the USA, and the place where I first developed my sense of style and love of fashion when I moved here in 2000.  It only seems fitting that I launch my newest passion project in the place that started it all...seriously, I am sitting here in the middle of the Fashion District!  My old office at Vivienne Tam is around the corner…(but that is a whole other story.)
For the past month, I have spent most of my time sitting in front of a sewing machine, reconnecting with my love of designing and assembling fabrics into wearable art.  Sewing was one of the last things I ever expected to do once I moved back to Florida but I have learned numerous times over the years not to question where my journey sometimes takes me.
Should something bring you happiness…go with it.
I originally launched Meredith Myers Designs in 2004 after moving away from NYC and finding my grandmother's sewing machine collecting dust in the garage.  She had passed away the weekend I moved to NYC, so it was odd that when I returned to Florida four years later, it was like she wanted me to know that things were going to be okay.
After years as a publicist, struggling comedian, and now a failed author with an unpublished manuscript sitting on my desk, sewing gave me something fun to do while I tried to figure out what I wanted to do with my life.  Nothing seemed to be working but her sewing machine from the 1970’s.  Since I'd always had an eye for fashion and fabric, it made sense that if I couldn't find what I wanted in stores, I might as well make it myself!
I got in some newspapers, and sold some purses through friends, but my heart wasn’t in being a fashion designer.  A bag is a great accessory to looking good, but what truly makes an outfit fabulous was the knowledge on the inside of the person wearing it.  I wanted to focus on that path.  Which was unpaved at this point, so I went to the library for information and to conduct some research.  Next thing I knew, I was in grad school studying to be a librarian, and then moving to Los Angeles.  So the poor sewing machine that I loved so much went back to collecting dust in the garage.
However as you already know, after five long years in LA, I am back in Florida...and now sitting at that sewing machine again!  I am once again unemployed, however, this time I know what I want to do with my life!
As the Stand-Up Librarian, my mission has always been about educating and entertaining people about the importance of libraries.  I believe each and every one of us can be an advocate for libraries whether we work in them or not.  So in addition to my literary comedy performances, videos, and witty commentary on StandUpLibrarian.com, I am now promoting literacy in my DESIGNS!  An example that nothing we ever do in our lives is a waste of time.
I say the only thing cooler than reading a good book is WEARING IT, so please help me share with the world the importance and necessity of our libraries and books by carrying one of my literary designs!  I am making cosmetic bags, wristlet purses, and the cutest fanny packs you will ever see since the awesome 80’s!  Seriously, I live for these literary fanny packs because when I have my arms full of library books, I don’t want the annoyance of a heavy purse on my shoulder!
All bags are made to order and sewn by me (when I am not on stage or at the library.)  The fabrics are also chosen by me depending on season, availability, and whether I enjoyed the book (sorry, no Jersey Shore or Paris Hilton books will be included here.)  All bags are fully lined in coordinating fabrics and contain strong zippers so you won't lose that library card.  I offer various price ranges so whether you are a library student or a library director, you can still own a Stand-Up Librarian original!
My Etsy shop is now officially open, so GET SHOPPING!!!!  The link is here: http://www.etsy.com/shop/MeredithMyersDesigns
I hope you will enjoy my "book" bags as much as I loved making them.
Meredith,
The Stand-Up Librarian Designer 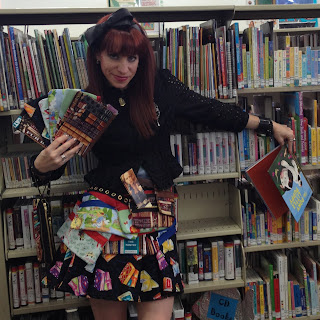 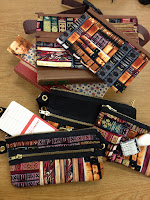 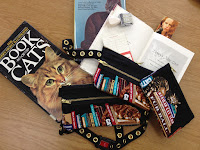 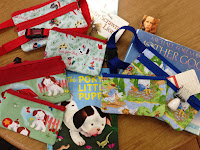 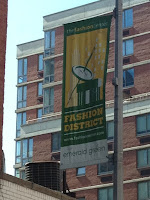 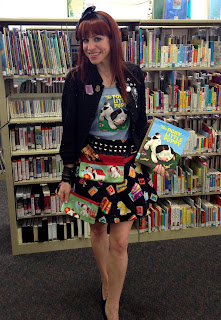 Posted by Meredith Myers at 2:22 PM

More importantly, as a librarian, it gave me a chance to show gratitude to the people that made me want to work in the library field in the first place.  As a comedian, it gave me an open opportunity to heckle audience members into donating money to the library.  How cool is that?  A win-win for everybody!
Anyway, I know many of you out there couldn’t make it to the event, but you can still donate money!  Just go to http://gulfbeacheslib.org/ to learn how.  To see all the fun you missed, just watch the video above.  Enjoy!

I’ve been fortunate in my life to have met and worked with lots of talented people over the years, and one of those people came back into my life last week when he was performing a show in Clearwater, FL.  The incredibly talented Ryan Star.
I met Ryan back in September of 2002 while working as a publicist in NYC with a band called Angel 13.  Ryan was in a band called Stage and since they were childhood friends with Angel 13, they did a show together at the Mercury Lounge.  Like a lot of people, I was instantly hooked on Ryan’s energy, intensity, and passion as a performer.  His voice was raw, rugged and full of power.  When I heard him sing the song “I Will Be Something,” it not only made me realize I was working with the wrong band, but that one day I wanted to be something more than just a publicist.
While Stage was signed to Madonna’s label Maverick, they still weren’t getting the press and attention I felt they deserved (which happens a lot in the music industry), so I asked Ryan to give me several cds so I could pass them off to key people in the industry.  Ironically, one of those people was an A&R guy from Atlantic Records (they would sign him years later as a solo artist) and another was a Tampa radio DJ named Kristy Knight, who would interview him about his hit song “Breathe” from that very album.
Thanks to Ryan and many other people who have inspired me to follow my dreams, my focus has since shifted away from PR work to that of libraries and comedy, however I am still very much a publicist when it comes to promoting talent that I think has something truly special that deserves to be heard and shared with the masses.
Being a friend to Ryan all these years, I have supported him from his time on “Rockstar: Supernova” to his shows in Anaheim and Los Angeles to last week in Clearwater, and all of that has been great.  But what Ryan has done for me as a fan is far greater.  His music speaks to me in ways no other artist has.  His music talks about the struggles of unemployment (“Breathe”), the pain of heartbreak and moving on (“Right Now”), and most importantly, that no matter what challenges are before us, there is always a “Brand New Day” just around the corner.  Ryan gives us hope.
I cannot thank Ryan Star enough for being the soundtrack to my often difficult life, while at the same time asking him to continue making more music that inspires so many of us in numerous ways.  Because I know when I finally get to where I am going, I will most certainly need a really kick-ass theme song to celebrate.
Ryan knows that before every show I text him begging him to play the old Stage song “Perfect,” which he never does.  I’ve never told him why.  For ten years, “Perfect” has been the song that cheers me up when things don’t work out…and despite what people may think, they don’t usually work out most of the time.  “Perfect” just reminds me to smile.
For more information on Ryan Star and to purchase his music, please visit RStar.net
Posted by Meredith Myers at 7:07 PM