Floridian of the Month

It was one month ago today I was getting on a plane and leaving Los Angeles for Florida with nothing but faith that things would be okay once I got there.  I still wanted to be a funny librarian doing what I loved.  While things weren’t where I wanted them to be in LA, it was still a five-year investment and difficult to walk away from...even though I was probably the unhappiest I have ever been in my life.
Would I find library work in Florida?  Acting roles?  Places to perform comedy?
My faith paid off…in a matter of days.
I applied to five library jobs and submitted a proposal to plan a fundraising event.  While at the library interviewing a local author for this blog, a comedy club owner booked me for a show.  In reading the local paper, I learned a film with James Franco was going to start shooting down the street.
Was it really my faith that those opportunities happened?  Or was it me making an effort to find them?  I like to think it was both.  Of course, whether I get those jobs or people laugh at my jokes is out of my control and I’m done worrying about it.  More important than the acceptance of others is just me learning to be happy again wherever I am, because that is probably the one thing actually within my control and always has been.  After all, geography is just a zip code or a difference in humidity.  Only now instead of sitting in traffic for an hour to get to the beach, all I have to do is walk outside.
And performing at a comedy club on the beach?  Well, just watch how many times I smile.  Enjoy…
Posted by Meredith Myers at 5:29 PM

In honor of Valentine’s Day, I want to declare my love for…MORRIS LESSMORE!
He isn’t People magazine’s ‘Sexiest Man Alive’ or the newest cast member on “Glee,” but he is the star of the Oscar-nominated short film ”The Fantastic Flying Books of Mr. Morris Lessmore.”  But don’t expect to see a MoAngelina on the red carpet at the Oscars talking to Joan Rivers.  Morris is an animated character who more or less would rather be at the library than brushing shoulders with Meryl Streep.  And you would too, if you saw the library he frequents.
Remarkably, I had the wonderful opportunity to see Morris’ film back in December in a private screening room at the Dreamworks Animation studios in Glendale, and that is where my love for him began.  But perhaps it is the publicist in me that waited until now to share it with you as the film is now nominated for an Academy Award in the Animated Short Film category and I hope this post will help generate some votes! (To any of the 6,000 Academy members who might be reading this, for the sake of reading, please vote for Morris!!!)
It is no secret to any of my Facebook or Twitter followers that like a broke Harvey Weinstein, I have already been “campaigning” for Morris and “The Artist” for months (that cute dog Uggie should have had a nomination!)  However, now I am getting the chance to explain why my love is so strong.  I am a huge fan of silent movies and especially the physical comedy of Buster Keaton (my other thrill of 2011 was seeing Buster Keaton’s “The Cameraman” at the historic Egyptian Theatre in Hollywood with a live orchestra as a part of the TCM Film Festival), and both Morris Lessmore and “The Artist” are exceptional films because they are perfect examples that even today in a world full of information overload, a great story can still be told without spoken words.
I know I know, a comedian applauding silence – rare.  But like reading a great book, silence often enables one to truly individualize the different textures and emotions of the story, allowing for varying interpretations.  And to me, that is what makes great art in any format, in any decade - storytelling resulting in a personal experience motivating one to think, feel, and hopefully, motivate as well.  What Morris Lessmore does in a variety of innovative filmmaking techniques, is tell the story of how stories can change your life.
I have shared many personal experiences on here in how the library has changed my life for the better.  If I wanted to learn a new skill, I went to the library.  If I wanted to start a new career, I went to the library.  If I felt lonely or lost, I went to the library.  Thanks to William Joyce and Brandon Oldenburg of Moonbot Studios, we now have this beautiful gift of film as a reminder of just how magical the library is.  A true love letter to literacy, if there ever was one.
So forget chocolate, flowers, and jewelry this Valentine’s Day, just give the love of books & libraries to your valentine by downloading the FREE film – that’s right, it is free right now on iTunes AND you can download the award-winning iPad app as well. BUT because I love all of you very much, I have provided it here as well (thanks Vimeo!)


About “The Fantastical Flying Books of Mr. Morris Lessmore”:
“Inspired in equal measures, by Hurricane Katrina, Buster Keaton, The Wizard of Oz, and a love for books, "Morris Lessmore" is a story of people who devote their lives to books and books who return the favor. The Fantastic Flying Books of Mr. Morris Lessmore is a poignant, humorous allegory about the curative powers of story. Using a variety of techniques (miniatures, computer animation, 2D animation), award-winning author/illustrator William Joyce and Co-director Brandon Oldenburg present a hybrid style of animation that harkens back to silent films and M-G-M Technicolor musicals. "Morris Lessmore" is old-fashioned and cutting edge at the same time.” – MorrisLessmore.com
Please visit the Morris Lessmore website to learn more about the film & links to download the iPad app:
http://morrislessmore.com/
Plus mark your calendars for July 24th when the book version of Morris Lessmore will be released by Simon & Schuster:
http://books.simonandschuster.com/Fantastic-Flying-Books-of-Mr-Morris-Lessmore/William-Joyce/9781442457027
Posted by Meredith Myers at 6:12 PM

Back to Florida with Author Tim Dorsey!

After spending most of January wrapping up my five years in Los Angeles and relocating back to my native Florida, it seems only fitting that my first video interview of 2012 should be with Florida author Tim Dorsey at the Gulf Beaches Public Library.  It was there in 2005 that I met Library Director Maggie Cinnella and decided to become a librarian.  I cannot thank Maggie and Tim enough for welcoming me back with such kindness and humor, reminding me that you can always come home again…and usually with a ton of crazy stories about the journey.  Dorsey’s Serge Storms character seems mild compared to some of the people I have met over the years!  Enjoy the video…especially the beach walk with me!
For more information on Author Tim Dorsey, please visit:
http://timdorsey.com/
For more information about events at the Gulf Beaches Public Library, please visit:
http://gulfbeacheslib.org/ 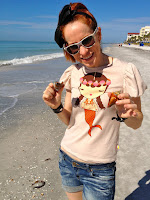 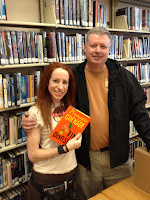 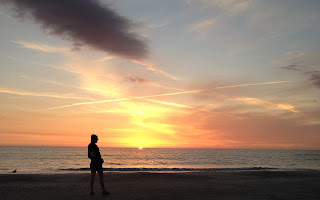 Posted by Meredith Myers at 4:23 PM