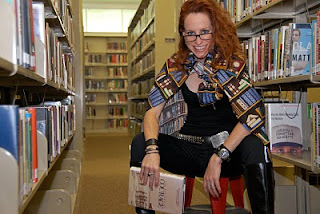 So I have been away from this thing for almost two weeks. I’m not one for excuses so I’ll just fill you in on what you’ve missed. Me on a plane back to Los Angeles. No place to live. No full-time job to work. No car to drive. No money to spend. Me sleeping on couches with nothing but hopes and dreams and probably a ton of delusion that this time will be different from when I left eight months ago to finish this Masters degree to be a librarian. My parents wanted to me to stay in Florida while I looked for work – they thought a supportive environment would be helpful - I knew better than to fall for that. It’s when you put it all on the line that you prevail.

I won’t bore you with the heartache that is in LA as well – my ex has moved on to dating someone ten years younger than me, yet my stuff still consumes the house we lived in together that he probably brings her to. How LA, right? So, instead of just moving forward, I have to constantly deal with the past, which is the toughest part in all of this – the emotional garbage that fills the trash can that was that life. Well, that and the lack of library jobs available right now. After working for free in libraries for the last year as an intern and a volunteer hoping to impress someone enough to get them to then hire me, I find I was naïve in thinking they had the power.

Who has time for this? I do – because I am making ME a priority again.

Everything has changed. I have changed. I am certainly smarter – the Masters degree is an example of that – but I am stronger in ways I never knew I could be. I want to work harder than I ever have in my life – and I have worked pretty hard over the years. I want to do whatever I can to make my dreams come true, not depending on anyone for anything. I am no longer someone who thinks I am entitled to anything – not a couch, not a job, not a friend. And that has made all of the difference. I no longer have high expectations for others, just for myself. Plus I smile more now. I am amazed just how much I smile – even when there is nothing but obstacles in my way or insensitive jerks that won’t let me sleep on my own couch. Maybe it is because I am happier or maybe it is just because there is no place to go but up. So this time, I know I will succeed.

And I already have.

In one week, I have worked every single day, while securing two additional jobs and applying for twenty more, should those fall through. I have had friends open the doors to their small apartments to allow me to sleep on their couches while at the same time lending an ear when I have a moment of doubt. And just so we are clear, a moment of self-pity is all I allow. I don’t have the time for anything more.

I am very sorry that nothing about this post is about the field of librarianship or making you laugh but since my mission with this blog is to offer you insight into the journey that is my life, I had to share it with you.

I started my first PR job in NYC ten years ago on July 10, 2000 – a decision that changed the direction of my life forever – but that is a whole other blog. I celebrated by buying a hundred dollar keychain at Tiffany, where I had the date and the word ‘Believe’ engraved on it. I wanted a reminder that my dream of moving to NYC was an example that anything is possible, even when the odds seem like they are against you. What people don’t realize is that I have always been a librarian, with or without the degree. For years, I have utilized the free information that surrounds all of us – using it to survive, reassess my dreams, and reinvent myself, all while trying to remaining hopeful in a world that sometimes seems lost. I’ve carried that ‘Believe’ keychain for ten years but have forgotten to look at it. Till now…
Posted by Meredith Myers at 2:59 PM

Meredith Goes to Capitol Hill to Fight For Our Libraries

While in Washington, D.C. attending the American Library Association (ALA) 2010 Annual Conference, I joined my fellow librarians on Capitol Hill for a rally in honor of Library Advocacy Day. I also interviewed Senator Jack Reed (D-RI) and learned what people can do to help save their libraries from budget cuts. Happy 4th of July America - God Bless Librarians!!!

Posted by Meredith Myers at 8:38 AM

How the ALA kicked my A$$ Into Shape 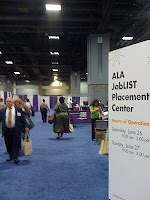 I’ve been home from the ALA national conference for two full days and I can’t bring myself to do a thing but catch up on season two of “True Blood” from NetFlix. The conference sucked the life out of me faster than Eric Northman on pretty fangbanger. I have no idea how to recover. Never have I ever been more overwhelmed by literature. Forget AA, I need ALA-A. My name is Meredith, and I am an American Library Association addict.

Before leaving Florida, I had developed a schedule outlining each and every meeting, workshop, and author signing that I had an interest in attending. There was little time for bathroom breaks or lunches, which was probably a big mistake but I was determined to make the best of it and secure myself a job. My email to the ALA career counselor had returned saying that she was already booked, so now I had to add ‘Stalk career counselor by hanging around job placement center for chance run-in’ on the schedule, which was really putting a time crunch on the “Dewey the Library Cat” author signing. I secretly hoped people were over that cat by now and could therefore knock out that signing in minutes. Oh the stress! Cute cat in library vs. me getting career advice that I so desperately need. What to do?

So I stupidly went for the cat book but was first in line and was then able to stalk the career counselor for the extra twenty minutes I had originally blocked out for cat lady. Career counselor was nice but didn’t say anything of real importance so probably a waste of time. That, or I talked too much again and can’t remember what she advised me to do. Dangitt! Make note - don’t need career counselor, need muzzle.

Since I was already in the ALA Job Placement Center, I decided to try and speak with the seven recruiters who looked bored off their asses in their booths. Wow, how unprofessional of me. Did I not learn anything from the counselor? I meant to say, who all looked leisurely and welcoming in their career stations. Another waste of time - nobody was hiring entry-level librarians! If that wasn’t bad enough, they seemed upset that we were the only people who seemed to be inquiring! Gee, I wonder why. Maybe because most of the upper management had jobs that could afford to send them to DC for the conference, which they instead used to go on Dan Brown’s “The Lost Symbol” tour thus skipping the conference entirely.

Not to worry, I did get plenty of “I would happy to take your resume and put it on file.” Can we stop saying this, people? There is no file. You know it. We know it. Besides, we are just killing more trees by all of this pretending. For once I wish someone would just say, “Go back to waiting tables, you’d have better luck.” Then I wouldn’t have to continue to carry my heavy work portfolio around in my trendy briefcase in the hopes that someone would be interested in looking over my bookmarks tied to Banned Book Week or my table display ideas for sexy seniors. Let’s just say I got more compliments on the hat I was wearing than I did on the head full of library knowledge that was wearing it. Don’t get me wrong. I am all about fashion, but how cool is my hat going to be when I am wearing it on the streets mumbling cataloguing codes or classifying my shopping cart full of free books. I need a job!

I don’t want to place all the blame of my exhaustion and insanity on the free books given away in the exhibit hall or the lack of leads from the placement center, as I’m sure there were certainly other reasons. Specifically, my diet of iced coffee and carrot sticks. After spending the week before in NYC, where I was eating everything in sight, I felt a real need to ignore the overpriced, unimpressive edibles available to us at the conference center and instead hit Whole Foods to fill my backpack with healthy alternatives that included celery, grape tomatoes, and a small container of hummus. The daily workout of carrying twenty pounds of books from the expo to the Metro and up a steep hill to my friend’s apartment also helped with my cardio and weight training, which is why I was able to drop any weight I gained in NYC in no time at all.

Now I am only an out-of-work librarian, so please check with your doctor before you starve yourself for free books, but I say look at the positives, people. I may not have a job but I am looking better than ever – thanks ALA!
Posted by Meredith Myers at 12:09 PM