It was 2001, and I was working at a public relations firm in New York City, where most of my accounts were music-related, with one being an independent label called Artemis Records, started by the legendary Danny Goldberg.  In working with this label over the next few years, I got to know Goldberg and began listening to the various artists signed to the label, my favorite being the music of Nathan Larson.  With a background as a rocker in the band Shudder to Think to his solo album Jealous God to eventually composing award-winning music scores for Boys Don’t Cry, The Messenger, Choke, and countless other films, Nathan has proven he is nothing but genius when it comes to writing and producing music.
While we had never met, nor worked together during our experiences with Artemis, it seems odd, yet somehow fitting, that ten years later Nathan and I would cross paths, however, not at a music event, but at book festival.  With Nathan a new author, and me a librarian - career fields we both probably never pictured for ourselves in 2001.  Another example that anything can happen in this journey called life if you are open to what opportunities it offers us.

With the release of his new book, The Dewey Decimal System, Nathan can now add published author to his long list of credits, and having read it, I have no doubt he will be exceptionally successful at it.  Plus, debuting a book featuring a lead character living in the main branch of the New York Public Library is a smart way to get me into doing PR again since here I am talking about it.

So for my first-ever post about a book on this blog, I hope you will enjoy this interview with rocker/film composer/author Nathan Larson and The Dewey Decimal System, as we discuss his love for the New York Public Library, the importance of supporting all libraries, his experiences in writing, and his latest project, doing the musical score for the film adaptation of Judy Blume’s Tiger Eyes, directed by her son, Lawrence Blume.

*And FYI, you have no idea how much great footage I have with Nathan as we talked about everything from Warren Zevon & Carl Hiaasen to the children’s and YA books of our youth to his numerous other projects in the works.  Perhaps I will share more at a later date but I know I only have your attention for so long.  I tell you, it never gets old to see how the love of books brings people together! 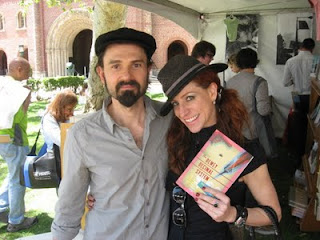 Posted by Meredith Myers at 5:41 PM

A Letter to My Mom on Mother's Day...

Dear Mom,
Happy Mother’s Day! Sorry, I am still an unemployed librarian. I know you are spending today thinking back to exactly one year ago, when we were together and celebrating my graduation with that Masters degree. I really wanted to put a library job offer letter in with your Mother’s Day card this year, but I guess you are going to have to settle for my promise that I won’t resort to stripping to pay the rent, regardless of how tough things have gotten. You have been nothing but my biggest supporter in my efforts to become a librarian and I cannot thank you enough for proofreading all of those term papers or for advising me not to call people idiots or morons on this blog in case someone might misunderstand my humor and use that against me in a job interview. I am so grateful for that advice, especially since sometimes I actually listen to it. I know being my mother is not easy. I think every mother wants to know that their children are happy and making a living at something they love. Thankfully, you still have my brother, and since he works with a successful comedian, hopefully that brings you joy and front-row tickets this Mother’s Day. Unfortunately, I’ve only been able to give you lame discounts at the restaurants I happen to be working at, on account of not being able to get jobs I’ve spent years training and educating myself for. Sadly, you will not be getting 50% off your dinner today. I had to quit because there was just no organization in the server side stand even after dividing up all the spoons and condiments via the Dewey Decimal system. I thought I was being helpful but my idiot manager thought it was annoying and suggested we part ways. Also, don’t expect any free books from me attending the ALA National Conference. I am so broke that I will not be able to make the trip to New Orleans in June. I know, I know, that means no beignets, as well. I don’t know what to say, paying my own way all these years in the hopes of networking myself into a job has apparently been pointless. And to think of the hundreds of people who said my business cards were so clever but never called or emailed. Bring out the violins, right? Anyway, the good news is that I still have this blog and apparently since posting my TCM/Robert Osborne interview last week, I am up to seven followers - this is huge! Oopps, I take that back. Someone just dropped off.  Probably because I used the word 'idiot.' I should have listened to you, mom.
Happy Mother’s Day to the strongest woman I know…because being my mom is one tough job!
Love,
Meredith 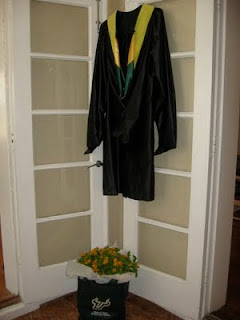 P.S. The reason your picture is not on here is because I remembered how mean some people (idiots) can be to me online. Why some people (morons) can’t just spend their time writing a fake letter to their mom is a bigger mystery than me not being employed by now. I will never bring you into that world, mom, even though you brought me into one with no library jobs. Thanks again.

Posted by Meredith Myers at 1:16 PM

"HOLLYWOOD BOULEVARD"
written by Meredith Myers
START the picture with the actual street sign: HOLLYWOOD BOULEVARD. In the gutter lie dead leaves, a Hooters receipt, burnt matches and a coupon for five dollars off Starline Tours. It is early morning.

CAMERA leaves the sign and MOVES WEST, the grey asphalt of the street filling the screen.

Over the scene we now hear…


WOMAN’S VOICE
Yes, this is Hollywood Boulevard, Los Angeles, California. It’s about ten o’clock in the morning but that doesn’t stop the tourists from getting their picture taken in front of the Grauman’s Chinese Theatre with a lackluster version of Michael Jackson. Oh, who am I kidding, I may need to use my Lady Gaga Halloween costume to make some extra cash, so I guess I better not make fun. Times are tough for librarians, you know.
SLOW DISSOLVE TO:

It is a crisp sunny day. The voice continues speaking as CAMERA PANS toward a SMALL APARTMENT BUILDING, an ugly structure where the landlord obviously doesn’t do repairs. CAMERA MOVES TOWARD AN OPEN WINDOW, where we look in on MEREDITH MYERS’ APARTMENT. A striking redhead, Meredith Myers, is sitting at her desk, wearing nothing but a baseball t-shirt with Vonnegut #5 on the back. She is probably wearing underwear but this isn’t that kind of film. In front of her is a laptop computer, MacBook Pro. Beside her, on the floor, is a stack of resumes and library job applications, where in ink the words ‘No response’ is written on most of them. Myers is typing.

It is a one-room affair, filled with entirely too many fabulous clothes for a person who doesn’t have a job to go to. The walls are decorated with vintage hats that probably look ridiculous when worn with pajamas. A poster-sized image of Myrna Loy and William Powell from “The Thin Man” hangs on one wall, while a Batgirl Librarian poster that reads ‘Librarians Are Heroes Every Day!’ on another.


MEREDITH
I can’t believe I graduated with my Masters degree a year ago and I still don’t have a Librarian job. Boy, this economy is a real bummer. If I have to work one more server job, I am going to…
FLASH OF OPRAH MAGAZINE ON THE BED


MEREDITH (CONT.)
No. I’m not going to drown my problems away in another ‘Living Your Best Life’ article, O.
FLASH OF TCM ON THE TV

The logo TCM CLASSIC FILM FESTIVAL April 28 – May 1, 2011 is displayed brightly in blue on the screen. As the logo fades, a distinguished gentleman in a suit, ROBERT OSBORNE, begins to talk but the TV is on mute.


MEREDITH (CONT.)
Wait a minute. I like classic movies! Well, you wouldn’t know it based on the D I got in that film history class back in college but hopefully they won’t require tests to attend. What I wouldn’t give to talk with Robert Osborne about “Desk Set” with Katherine Hepburn. I bet just a few words from Robert would be just the motivation I need not to give up on being a librarian! Plus if that Ben Mackiewicz is around, we could talk baseball films!
FLASH OF MEREDITH AND BEN AT A BASEBALL GAME


MEREDITH (CONT.)
OK, slow it down slugger, you don’t want to come across as a stalker to these people. Besides, this is no longer a voice-over, so now you are talking to yourself and there is no one in the room. Maybe this behavior is why people haven’t hired you!
FLASH OF LIBRARIAN RIPPING UP RESUME


MEREDITH (V.O.)
Fine, I am back in my head. But no, I don’t believe that is the reason. The right job opportunity will come. Someone WILL hire me. I mean, look at the six people that read my blog! That has to mean something.
DISSOLVE TO:

***I will be doing a separate Blog Post about the "To Kill a Mockingbird" screening, featuring appearances by Gregory Peck's family and Mary Badham (Scout).
Posted by Meredith Myers at 2:56 PM